The caveman as sex symbol

Share All sharing options for: The caveman as sex symbol 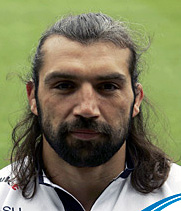 The man in the photo is not an actor on the new show "Caveman," but rather the latest sex symbol in France. He is Sebastien Chabal, a rugby player,who has made French women swoon during the rugby World Cup being held in France. As the Times of London wrote:

He's garnered attention for his bone-crushing tackles along with his mountain-man beard and Hagrid hair. Altogether the effect is that of a marauding beast let loose on the pitch. He's become the darling of the French team, appearing on the cover of Paris Match, accompanied by images of women wearing Chabal T-shirts at a game in Cardiff. Fans create YouTube video odes to his magnetism. Frenchwoman Muriel Tournadre encapsulates his appeal on her blog: Car il incarne le mythe de l’homme fort - because he incarnates the myth of the strong man.

Despite his caveman looks, Chabal is actually very gentle and shy, his wife Annick told Paris Match. "When I think that people imagine that Seb deliberately set out to look like Attila the Hun, it makes me smile," she said. "No one is more sensitive and withdrawn than him." The player reportedly grew his beard and man on a bet while his wife was pregnant with
their two-year-old daughter.

Wrote one fan: "The bulging thigh muscles, the throbbing biceps, the just back from the hunt grooming? What's not to love." Said another: "They call him the caveman: he’s hulking, at some angles he looks feral. I’ve never heard him speak. But from one look you can tell this Fred Flintsone would see that his Wilma never went without."

Even the guys are getting into him. The Beard Community Bulletin Board had several posts by men jazzed that the hirsute look was in. "Give us time and our bearded faces will be THE new sex symbols worldwide....world DOMINATION! MUhahahahaaha," one poster wrote.

Chabal wasn't fierce enough to get France into the finals; his side will play today in the third-place game. As for his sex appeal, to each his own. The Mountain Man/Neantherdal look has never floated my boat, but whatever turns someone on is fine by me. (This jock is more my taste). --Jim Buzinski