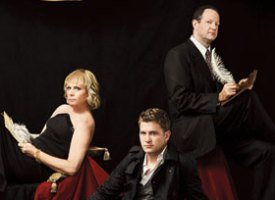 We've long been disappointed by the lack of sports names and faces in the annual Out 100, the monthly magazine's annual list of gay men and lesbians to remember from the year. We've been saying for a while that 2007 will be in part remembered as the year that gays in sports took a great leap, and Out has recognized that by naming eight sports figures to their list.

Obvious honorees this year include John Amaechi and Christine Daniels, but it's also great to see them recognize some amazing young athletes who represent the wave of out high school and college jocks we're seeing: Rutgers swimmer Sean Smith and UCSB tennis player Matt Coin, both of whom Outsports introduced to the world. Professional race car driver Evan Darling and basketball player Demarco Majors .Jim and I are also very honored to be recognized this year.