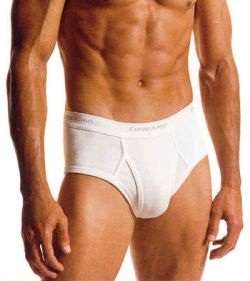 Tom Brady, underwear model? In news that will gladden the hearts of Brady fans everywhere, we get this from the Boston Globe:

In Touch Weekly is reporting that the Pats quarterback is being wooed to become the next celebrity model for - wait for it - Calvin Klein underwear. The mag says the football star's been offered more than $1 million to follow in the footsteps of former Funky Buncher Mark Wahlberg, whose stint in Calvin Klein skivvies served him very well indeed. ... While Brady is undecided, In Touch says his supermodel sweetheart, former Victoria's Secret gal Gisele Bundchen, supports the idea.

Allow me to put on my catty hat for a sec: If Brady wants to model underwear, he better get himself a hot bod. Like most quarterbacks (Brady Quinn is an exception), Brady does not have a chiseled physique that Calvin Klein models possess. "I just don't have enough muscles to hurt or anything like that so I'm immune to muscle strains or aches or anything like that," Brady said in August. However, someone making of Brady's stature can easily hire a personal trainer to whip him into boxer and briefs shape. --Jim Buzinski
Hat tip to Sports By Brooks