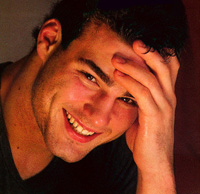 The man who may be Philadelphia sports fans’ poster boy for unfulfilled expectations has announced his retirement from the NHL. Eric Lindros made it official today, at the age of 34. His size and skills – he could pile up points and physically dominate a game – got him dubbed “The Next One” but he never approached the accomplishments of Wayne Gretzky or Mario Lemieux.

But before we get into all that unpleasantness, let’s make one thing perfectly clear – and this is not up for debate so don’t you dare try to disagree with me – Eric Lindros is the sexiest man alive. The Philadelphia Inquirer had a close-up of his face on the cover of their Sunday magazine once upon a time, and all I could think was that he is both handsome and pretty at the same time. He is the perfect combination of manliness and beauty. He is probably my ultimate object of lust.

Now that we’ve got that out of the way…

The career of Eric Lindros has two running themes: controversy and injury. Many people feel his parents, Carl and Bonnie, wielded too much influence throughout. He refused to join the junior team that drafted him, the Sault Ste. Marie Greyhounds. When he was drafted first overall by the Quebec Nordiques in the 1991 NHL entry draft he refused to play for them as well. Under bizarre circumstances in June 1992 the Nordiques made a deal to trade his rights to the Flyers, and then turned around and worked out a trade with the Rangers, trying to back out of the trade with Philadelphia. An arbitrator ruled in favor of the Flyers and awarded them the rights to Lindros.

The Flyers sent six players, two first-round draft picks and $15 million to Quebec. It turned out to be a great deal for Quebec, but not until after the team moved to Denver and became the Colorado Avalanche. One of the players was Peter Forsberg, who went on to help the Avalanche to two Stanley Cups. Jocelyn Thibault, drafted with one of the Flyers’ picks, was part of a deal to acquire goalie Patrick Roy, another key member of the Avs championship teams.

Meanwhile, things started well for Lindros. In his third season, the lockout-shortened 1994-95, he won the Hart Trophy as Most Valuable Player. Lindros, John LeClair and Mikael Renberg formed the feared “Legion of Doom” line and powered the Flyers to a division title and a run to the conference finals after a five-year playoff absence. In 1997 the Flyers reached the Stanley Cup finals for the first time in a decade, only to be swept by Detroit.

Then it all went to hell. Injuries. Feuding with management, particularly GM Bob Clarke, who questioned Lindros’ toughness. A series of concussions. The collapsed lung suffered during a game at Nashville, the aftermath of which led to another war of words between the Lindros camp and the Flyers. More concussions. Criticism of team doctors, leading to the captain’s “C” being taken away in midseason and given to Eric Desjardins. Being criticized for returning from a concussion for game 6 of the 2000 conference finals against the Devils – never mind that, with the Flyers in meltdown mode after taking a 3-1 series lead, Lindros was their best player on the ice that night – only to be concussed again by a pulverizing Scott Stevens check in New Jersey’s game 7 victory. After becoming a restricted free agent and refusing the Flyers’ qualifying offer, sitting out the 2000-01 season demanding to be traded to Toronto. Finally, the trade to the Rangers in August 2001.

He played three seasons for the Rangers (actually managing to appear in 81 of the 82 games in 2002-03), but suffered yet another concussion in his final New York season. Some doctors urged him to retire then. After another year off thanks to the 2004-05 lockout, he finally got his wish and signed with Toronto, only to suffer wrist injuries that limited him to 33 games. Last year he signed with Dallas, appearing in 49 games and scoring just 5 goals and 26 points.

Ironically, the timing of the Lindros retirement announcement coincides with recent events involving two key figures in his story. Peter Forsberg pulled out of participation with Team Sweden in an upcoming tournament, citing further foot problems. Forsberg’s comeback attempt appears in jeopardy, and he now appears closer to retirement than ever. And Scott Stevens will be inducted into the Hockey Hall of Fame next week.

This begs the question, should Eric Lindros go into the Hall of Fame? He finishes his career with 372 goals and 493 assists. That’s 865 points in 760 games. Is this enough to get him inducted? Consider the case of Cam Neely: in 726 games Neely amassed 395 goals and 299 assists for 694 points. Neither Lindros nor Neely played on a Stanley Cup winner. Neely was inducted into the Hall in 2005. Neely didn’t have the baggage that Lindros has, with the Boston Bruins retiring Neely’s number. It doesn’t seem likely that the Flyers will retire number 88 any time soon.

Another issue, according to one Toronto hockey writer, is Lindros’ involvement with the NHL Players’ Association. He’s expected to take a job with the union. This actually makes sense considering his history of fighting the system – refusing to play for the juniors team and the Nordiques, sitting out the 2000-01 season and demanding the Flyers trade him to Toronto – but it may not sit well with the selection committee.

Will the controversies influence the decision? Only time will tell, but if Eric Lindros doesn’t make it into the Hall of Fame, it will go down as one final unfulfilled expectation. --Joe Guckin