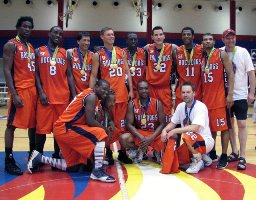 This week Logo announced the launch a show we’ve been watching the development of for about a year. Rock Dogs is the story of, well, the San Francisco Rock Dogs, one of the best (yes guys, probably the best) gay basketball teams in the world. We’re told the series will follow the players on the team as they live together in San Francisco.

Two friends of Outsports, Rory Ray (No. 20, our Web developer) and Bill Kendall (No. 22, another genius Stanford alum, who is also producing the show) are big parts of the Rock Dogs and the show. Plus, DeMarco Majors (No. 15), who played pro basketball overseas and was a part of this year’s Out 100, is also on the team. (Read about their 2006 Gay Games gold medal.))

We’ll be following the development of the show throughout, so stay tuned. No word yet on a launch date, though we’re told it will be next summer. –Cyd Zeigler jr.