A love affair in Baltimore

Share All sharing options for: A love affair in Baltimore 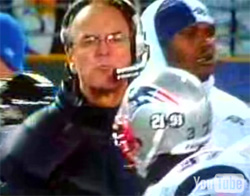 We saw Harrison gesture wildly in front of Billick, saying something, then Billick blowing him a kiss. (Here it is on YouTube, though the NFL might have already yanked the clip). Harrison (voted by his peers the dirtiest player in the NFL) "told ESPN that he was criticizing quarterback Kyle Boller in front of Billick after safety James Sanders intercepted a Boller pass at the Patriots' goal line in the fourth quarter," the Baltimore Sun said.

“I’m married, so he can’t be my girlfriend,” Harrison said after. “I’m not that kind of guy.”

I once heard Billick on an NFL Films segment telling his players his rules for training camp. Nobody is allowed in a player's dorm room during camp. "No one. Mother, father, agent, girlfriend, boyfriend, whatever," Billick said. Maybe the Ravens coach swings both ways. --Jim Buzinski