Wilbon: "You're not a man" if you're gay

Share All sharing options for: Wilbon: "You're not a man" if you're gay 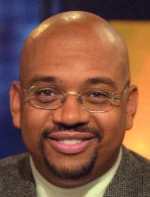 According to PTI personality Mike Wilbon, you're not a man unless you like women in lingerie. The Washington Post-columnist-turned-TV-star encouraged viewers, during the daily "what to watch" bit on the Dec. 4 episode of ESPN's Pardon The Interuption, to tune into "Boston Legal, Rudolph the Red-Nosed Reindeer in HD, and most importantly, Victoria Secret Fashion Show. If you don’t watch, you’re not a man.”

It was a throw-away line, but it certainly gives an insight into one man's personal belief that you're not a real man unless you're straight. While it might not be hard to believe that a black man in America would think this, it's still somewhat surprising when someone like Wilbon, who's supposed to be an enlightened journalist, sinks to this level in his on-camera comments.

I remember him ripping Tim Hardaway when the former NBA star said he hates gay people, but I also distinctly remember him saying, essentially, "but Hardaway was speaking for the majority of athletes." It's a shame that the sports media, including guys like Wilbon, continue to push this idea that gay men aren't real men, and that sports is no place for them. A sad commentary.

P.S. For those of you who think there's too much non-sports talk on Outsports (yes, there are still a few of them), please not that Wilbon quickly rejected Tony Kornheiser's suggestion that he watch the Penn-UNC basketball game instead of a red-nosed reindeer and perky bosoms; Wilbon heartily declined. -Cyd Zeigler jr.