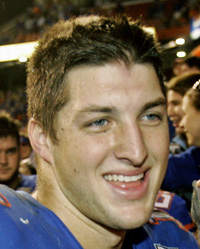 In what might be a precursor to the Heisman Trophy vote, Florida's Tim Tebow won the Davey O'Brien Award, symbolizing the top quarterback in college football. He also won the Maxwell Award as the game's top player.The Gator stud is the first major college player to run for 20 touchdowns and throw for 20 in a season.

He beat out Oregon's Dennis Dixon for the O'Brien award and Arkansas' Darren McFadden for the Maxwell. Dixon was the odds-on favorite to win a lot of awards before he got injured and missed the Ducks' final three games. Expect Tebow to win the Heisman Trophy when it is announced Saturday, though it is hard to deny Hawaii's sensational QB Colt Brennan. --Jim Buzinski