Share All sharing options for: Congressman: Kopay my hero 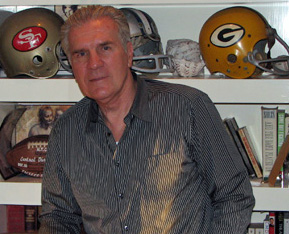 Washington congressman Jay Inslee supported the Employment and Nondiscrimination Act that passed the House in November and would offer job protection based on sexual orientation. In arguing for the bill's passage, Inslee, a Democrat, talked about David Kopay, a former star for the University of Washington who came out as gay after a nine-year NFL career (Click here to see Inslee make his speech on C-SPAN):

Mr. INSLEE. Madam Chairman, this bill is about discrimination, but it is also about economic competition.

Thinking about this bill today, I was thinking about the 1964 University of Washington Huskies football team that went to the Rose Bowl. They had a slashing, tough, brutal halfback named Dave Kopay, a boyhood hero of mine. He helped them go to the Rose Bowl. Later on after he goes to the NFL, we know he's a gay guy. If the UW hadn't put that guy in, there are several games they would not have won.

I had a farewell lunch with Dave, who is retired and moving to Seattle from Los Angeles. He had tears in his eyes and choked up when he told me about what Inslee said. Dave had been unaware Inslee made such a speech on the floor of the House until being informed by Corey Johnson, himself a pioneer in gay sports after coming out while on his high school football team.

Kopay is still giving, having pledged $1 million this fall to the gay center at the University of Washington. Dave's Husky ties run deep and Inslee honoring a fellow alum show how strong the bond is. --Jim Buzinski