Dungy, the Bible and gays

Share All sharing options for: Dungy, the Bible and gays 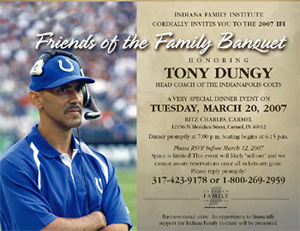 Indianapolis Colts coach Tony Dungy finally answered some questions about his views on gays, which has been an issue since he helped raise $75,000 for an anti-gay political group in Indiana. In a profile on HBO's "Costas Now," Bob Costas asked Dungy questions about religion and then this:

Costas: What if you had a player who was openly gay? Would that be alright with you?

Costas: And if he's a good football player, he's on the Colts.

Dungy: He would be, yes.

Dungy paused before answering the question and seemed uncomfortable when replying. It's sad and telling that he would feel a need to tell this player his views on homosexuality, rooted in the Bible. He said in a previous answer (reprinted below) that he does not proselytize to his players, but he seems to make an exception for gays. And it's interesting that he says "I would hopes that I would give him the same respect." Hope? This clearly shows Dungy is not comfortable with gays; I wonder if he knows any? I guess it's nice that he would keep a gay guy if he was a good player, though saying anything but would brand him a bigot.

Dungy has always struck me as a decent man, but he has a blind spot on the gay issue and I can't respect him for that; too many people have used their religious beliefs to discriminate against gays and don't tell me I have to accept it. --Jim Buzinski

Dungy also had this to say on the subject of religion and his players:

Costas: I think just about everybody respects your faith because they know it's sincere, but this seems like a legitimate question. If you had a player on your team who was a devout Muslim, or a devout Jew, or was, in his own way, adamant that he was an Athiest and would not take part in the pre- or post-game prayer ... how would you handle it?

Dungy: We actually had one guy in the time that I've been coaching that didn't want to take part in the prayer. We talked about it, he told me his reasons why, and I accepted that.

Costas: So if a player happens to be Muslim or Jewish, you're available for them to talk, but you don't proselytize.

Dungy: I don't, if they're not interested in hearing about it. I think our players know and understand that if they don't look at life the way I do, it's not going to have an adverse effect on our relationship.