I had the great fortune of visiting Atlanta for the last 24 hours for a book signing at Outwrite Books. The event was co-presented by the Atlanta Gay Sports Alliance, a great group that combines the resources of a bunch of gay-sports groups in Atlanta to promote gay sports. Mike Horton, the commissioner who plays softball, basketball & tennis (at least), has been very good to me and Outsports for years, and it was his brainstorm to have the book signing, so big thanks to him and AGSA.

Of course, the weather leading up to the event made me think I was in Kansas and Dorothy was about to go flying by in a house. Between the dark clouds, heavy wind and rain, turnout was dampened, but about 35 people showed up, and most seemed to enjoy my talk, which focused on explaining what we mean by the Outsports revolution. My favorite part was a story told by Terrence, a guy who showed up at the book signing, about an Olympic ex-boyfriend who wouldn't come out because of 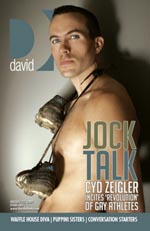 his fear of losing sponsors. He said he expects the guy to come out in the next couple of years once his competitive career is over. I hope so.

After the event, we headed over the Blake's with Atlanta football's Thurman Williams and former HX editor Trey Butler (who just got engaged to his bf, Brian), which was decked out in college football paraphernalia. Mike said it was in my honor, but I didn't believe him. But, LOL, I wouldn't have believed him if I hadn't seen for myself that the very generous gang at put my mug on the cover of this week's magazine. That was really nice of them, and it was a big boost for Outsports - our first cover!

The great evening was capped off with some Grey Goose & tonic at the home of Outwrite owner Philip Rafshoon and his partner, Robert.

Big thanks to Outsports' lawyer, Cynthia Counts, who lives in Atlanta and let me stay at her house. She, Brandon & Austin really showed me Southern hospitality. Oh, and big shout out to Dave at The Boy Next Door in Atlanta. When I mentioned to Mike that I had forgotten a belt, he called Dave and got one. It was very cool of him. -Cyd Zeigler jr.