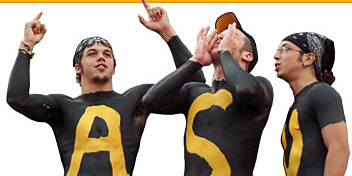 This headline accurately reflects the sentiments of Michigan football fans everywhere after the Wolverines lost their season opener, 34-32, at home to Appalachian State. Who? Yes, the Division 1-AA team from tiny (13,000) Boone, N.C., went into the Big House and knocked off No. 5 Michigan before 106,000 stunned and angry fans. The Mountaineers kicked a field goal with 30 seconds left to go up, 34-32, then preserved the game by blocking a Wolverine 37-yard field goal try on the game's last play (it was the second blocked Michigan field goal in the last two minutes).

Some are calling it the greatest college football upset ever, not hard to argue considering it was the first time a 1-AA team had ever beaten a ranked 1-A team. App. State has won two consecutive Div. 1-AA titles (the division is now renamed something dumb like the College Subdivision), but no one outside of Boone gave them a chance.

Carr, who has lost five of his last six against Ohio State and five of six bowl games, has been under fire for years, but this loss could set the path for his firing if the Wolverines don't run the table. As for App. State, they next play some school called Lenoir-Rhyne, which sounds like a country singer. --Jim Buzinski