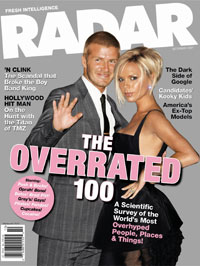 Hooray to Radar Magazine for putting David Beckham and Posh Spice on its cover "The Overrated 100," listing the "world's most overhyped people, places and things." In listing the Beckhams at the top the magazine writes: "It’s not that they’re untalented; it’s just that he’s an overpaid soccer star and she’s a pointless collection of body parts."

Here, here. I was stunned by the amount of media coverage Beckham's arrival to the L.A. Galaxy garnered. We had a soccer star near the end of his career playing for a bad team in what soccer aficionados consider a minor league (and his wife was long ago part of a lame pop group). Yet he was given breathless coverage in the media, including making the cover of Sports Illustrated, and was allegedly on the Hollywood A-list (which says a lot about the A-list). It's not Beckham's fault that he has been hurt and he has shown some flashes of brilliance in limited play. But he will not change the attitude of Americans to soccer and the buzz is definitely gone. (Hat tip to L.A. Observed). --Jim Buzinski