Share All sharing options for: Advocate 40 has 4 from sports, missing #1 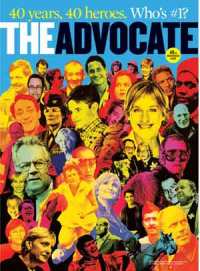 In celebration of the Advocate's 40th anniversary, they asked their readers to submit their top 40 openly gay heroes. It was great to see four from sports make it: Billie Jean King (#6), Martina Navratilova (#11), Greg Louganis (#13), and John Amaechi (#38). What's really sad (both for the person and as a commentary on the Advocate) is that they did not include the most important champion of gay rights in sports: Former NFL running back Dave Kopay.

When Greg Louganis was a closeted diver in the '76 Olympics, Martina and Billie Jean were living secret lives, and John Amaechi was 6, Kopay had already become the first former pro American athlete to come out of the closet. He debated gay rights on TV with the homophobic Anita Bryant. He has been an outspoken advocate of gay rights, doing it in sports before anyone else and opening the closet door for others - including those on this list - to come out. Esera Tuaolo has told me several times the impact Kopay's book had on him, and that Kopay is his hero.

Also missing from the list: The Front Runner author Patricia Nell Warren. Her novel is the best-selling gay-themed novel of all time and has affected generations of gay people coming out of the closet.

I don't know if the omission of Kopay is more a sad commentary on the Advocate or its readers; but when I think about Dave and see some of the people who did make the list, it certainly doesn't make me want to run out and subscribe to the magazine. Though, the goal of these lists so often is to leave off people whom the editors know should be on the list, to create "controversy" and get people talking. Sadly, mission accomplished. -Cyd Zeigler jr.