Share All sharing options for: NFL opens up, finally 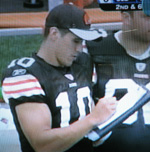 The NFL kicked off its first regular Sunday and it was a doozy. We saw three-last play field goals, 80 points total in Dallas and Randy Moss being a model citizen. The only third-string quarterback to get any attention was in Cleveland, where rookie Brady Quinn was shown holding a clipboard in the Browns' 34-7 loss to Pittsburgh. The sidelines was where Quinn needed to be; history is replete with young QBs who got thrown into the grinder too soon and very few are as resilient as Peyton Manning (who went 3-13 his rookie season). Quinn needs to sit and learn a bit more, but there is no doubt he will be playing by late October at the latest.

The ugliest moment came in the Meadowlands, where Jets QB Chad Pennington went down with a leg injury of some sort in the third period and N.Y. Jets fans, at the home opener, cheered as he lay on the ground writhing in pain. Pennington came back later and threw a TD pass and was met with cheers. Fans can be such a--holes. Check out our complete Week 1 notes.--Jim Buzinski