Share All sharing options for: Missing Marty in The National Football League 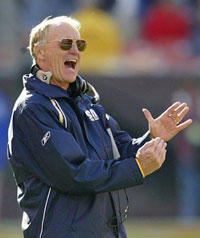 Cyd, Jim Allen and myself have always had a soft spot for former San Diego, Kansas City, Cleveland and Washington coach Marty Schottenheimer. This goes back to the days the three of us met in the mid-‘90s and started watching the NFL together while Marty was riding high (at least in the regular season) as coach of the Chiefs. He is now out of football after being fired in San Diego after last season.

We loved what we called the Marty Schottenheimer Cliché Festival, where the coach would earnestly spout one after the other. Our favorite was his constantly saying “The National Football League,” as opposed to “the NFL,” or “the League,” or “football,” or nothing. Such as, “You can’t commit turnovers if you want to win in The National Football League.” We would watch him being interviewed just so we could see how many times he would utter the phrase.

Turns out we weren’t the only ones who loved Marty Speak, as we read in Phillip B. Wilson’s blog in the Indianapolis Star. Wilson went to San Diego in advance of the Chargers-Colts playoff game this weekend:

Some of the reporters miss coach Marty Schottenheimer. They share several stories, how Marty enjoyed the banter with them. They created a "Marty pool," a silver-colored circular cage with blue balls inside. You roll the cage and a ball spits out. Each ball has a number. When Marty was coach last year, the reporters would play Marty pool. Whatever number they got, that was how many cliches they needed Marty to say during that day's press conference. I'm told Marty wanted in the pool, too. … "How many cliches did he get up to?" I asked [a writer]. "He hit double digits once," he said.

As an aside, I named my Fantasy Football team last season “Martyball.” It lived up (or down) to its namesake – I won the regular season title … and lost in the playoffs. –Jim Buzinski