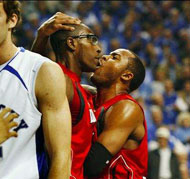 This photo of two Louisville Cardinal basketball players celebrating during a Jan. 6 win over archrival Kentucky has caused a stir for the paper that published it.

The photo by Sam Upshaw Jr. showed Jerry Smith hugging Juan Palacios after a big play in the first half. Many readers thought the two players were kissing, but the sports editor and other editors saw nothing but celebration. At first glance it does look like a kiss but a closer looks shows that might be a visual distortion (We are running a smaller version of the photo; to see the full version go here).

Some of the comments registered by angry, offended and/or baffled readers: "Awful," "an embarrassment," "horrible decision," "poor judgment," "distasteful," "a mystery" and "shame on you."

I have to admit I was a little baffled by the response. Aren't sports the province of the ubiquitous fanny pat? Aren't players in each other's faces all the time during athletic matches? Yes and yes. So what's a little game-time hug in that universe?

Well, apparently this photo crossed a line for some readers, some of whom demanded an apology and/or an explanation.

Platt did not apologize and used her column to explain the editorial decision that went into selecting the picture. She wrote about “people bringing their own ideas and baggage to what they see and read.” She thought the photo, though, was confusing -- “I was just puzzled by it -- and its lack of context -- and I think it distracted from the news it was supposed to convey.”

Fair enough, but one line in her column bothered me: Sports editor Harry “Bryan made the selection, but he said four other editors looked at the photo and no one raised any red flags.”

Red flags? This makes it sounds like had the photo conclusively showed them kissing this would have been problematic. Why? It would have been a natural moment in full view of 20,000 fans and we have seen jocks kiss before. What is so wrong about that? Then again, it is Kentucky.

A side note: I have worked for newspapers and know how much readers can read into a photo chosen innocuously. During the 1984 campaign I was a young news editor at the Centre Daily Times in State College, Pa., and we ran separate shots from a debate between Ronald Reagan and Walter Mondale. We were flooded with calls the next day from Reagan supporters accusing us of air-brushing a squirrel on Reagan’s neck (I am not making this up). Reagan was pretty wrinkly by then and if you stared at his neck in the photo it could look like there was a small rodent residing there. Typical liberal media bias, these irate readers yelled at us. –Jim Buzinski

Hat trip for this item to Deadspin via MediaNews.