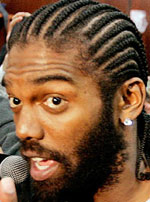 If the San Diego Chargers are smart, they will invite Rachelle Washington from Florida to be on their sidelines in the AFC title game against the New England Patriots. It would mean Patriots receiver Randy Moss would not be allowed on the field.

A temporary restraining order has been issued against Moss in Florida, preventing him from going to within 500 feet yards of Washington, who accused Moss of “battery causing serious injury” during an incident Jan. 6 at her home. Moss denies the allegation. (Read the restraining order here).

So far, it’s a case of he said-she said. She said they were dating; Moss said they were just friends and have been for 11 years. She said he injured her and did not allow her to seek medical care. Moss said “whatever happened, it was an accident” and said she was free to seek care. He did not elaborate on what the accident was. In her claim for a permanent restraining order, she said Moss owned a gun and had a history of drug and alcohol problems. A hearing has been set for Jan. 28. He claims Washington was trying to extort him:

My favorite part of Moss’ rambling press conference to reporters was this: “In my entire life of living, 30 years, I have never put my hand on one woman, physically or in an angry manner.” He must have forgotten this from 2002:

MINNEAPOLIS -- Randy Moss spent the night in jail facing a possible felony charge after being arrested for allegedly pushing a female traffic agent a half-block with his car.

The 27-year-old agent stepped in front of Moss to stop him from making an illegal turn in downtown Minneapolis, and Moss used his 2002 Lexus to slowly push the officer a half-block along the street, stopping when she fell to the ground, police spokeswoman Cyndi Barrington said.

Moss is technically accurate – he did not put his hand on the traffic agent; it was the bumper of his Lexus and it cost him a fine and probation. –Jim Buzinski