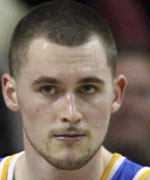 UCLA men’s basketball coach Ben Howland condemned the behavior of fans at the University of Oregon after his Bruins beat the Ducks in a key Pac-10 game on Thursday.

"I thought there was some really vile, inappropriate, disgusting innuendo," Howland said. "They wrote in one of the local papers that it wasn't the worst ever at Mac Court. I thought, 'Really?' After hearing what they were saying, I was like, 'What was the worst?' "

The taunts were directed at UCLA star freshman Kevin Love and his dad, Stan, who played for Oregon. Oregon fans are pissed that the younger Love chose UCLA over his hometown school and they let him have it. Kevin Love’s cellphone number was also posted on the Internet this week and he received more than 400 text messages.

Several students painted their chests with anti-Love remarks. "Love has love handles" and "Love me gently" were among the less vulgar. Some of the student section's signs were taken away before the start of the game because of their obscene nature.

Signs were held up that referred to past issues with drug abuse and mental illness suffered by Stan Love's cousin Brian Wilson, who was a member of the Beach Boys. Stan's brother, Mike Love, also a member of the band, was at the UCLA-Oregon game.

"It was totally out of hand," said Stan, who sat about five rows up from the floor Thursday. "I had friends with me from New York and Florida who said if Oregon was the last university on the planet they wouldn't send kids to that school."

There were several signs and chants calling Kevin "fat," and others that questioned his and Stan's sexuality.

Taunting someone as gay at college basketball games is not uncommon. Duke’s J.J. Redick, now in the NBA, dealt with it all the time.

It is still sad that playing the anti-gay card is still considered by some to be the ultimate slam, and shows how the mob mentality can turn people into mindless bigots. Kevin Love, though, had the last laugh: He had a game-high 26 points and UCLA freshman record 18 rebounds. "I got a good ovation from the crowd," he said with apparent sarcasm. "They said a lot of nice things about me and we came out and got the win." –Jim Buzinski