Reaction to our All-NFL Hot team

Share All sharing options for: Reaction to our All-NFL Hot team 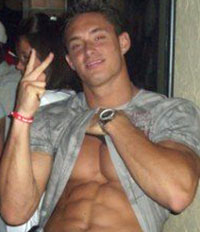 It has been amusing to see mainstream reaction to the 2007 All-NFL Hot team posted this week, and featuring the likes of Tampa Bay safety Sabby Piscitelli (right).

Deadspin, the most popular sports blog and a friend of Outsports, ran a small mention and got some amusing comments:

“I'd root for this team.”
“Warren Sapp is oddly disappointed at not being included.”|
"OK, Giants have a 3-2 edge over Patriots on the list, does this help or hurt their chances in the Super Bowl?”

The Edge, a blog of Philadelphia Magazine imagined this take on a popular WIP radio morning sports show:

A blogger for a Tampa Bay Bucs fan site, somewhat uncomfortable with discussing a gay list, nonetheless panned our choice (it was Jim Allen’s, not mine, I swear) of lineman Todd Steussie:

If homosexuals want to be taken seriously in this world, they have to start with the simple things - like not putting Jimmy Durante's overjuiced nephew on their hot lists.

On a Cleveland Browns fan site, it was noted that Brady Quinn was our overall MVP:

"Quinn may be good-looking, but I don't give a good goddamn if a freakin' cyclops is under center. Just win baby!"

A site for California Golden Bear fans noted that we had three alums on the team and at least one of our own was among the posters:

"Some of us do love our Bears the same way Outsports does. Knowing they’re Golden Bears just makes ‘em hotter."