Will Gay Games move to Cleveland in 2014?

Share All sharing options for: Will Gay Games move to Cleveland in 2014? 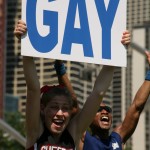 Let the bidding wars begin. Gay sports enthusiasts in Cleveland are expected to announce their intentions today to bid on Gay Games IX in 2014. Under the banner of the Cleveland Synergy Foundation, the backers of the bid are scheduled to make the decision public during a press conference and enter a competition also expected to include Boston and Miami.

The new foundation is an effort to "measurably enhance the economy, image and quality of life in the greater Cleveland GLBT and Straight community by attracting and creating significant cultural, athletic and benevolent events and festivals," according to its web site. The group is partnering with the Greater Cleveland Sports Commission and Positively Cleveland Convention and Visitors Bureau on the bid.

Representatives from both of those organizations as well as the city and Douglas Anderson and Brian Tavolier of Cleveland Synergy are scheduled to speak at the press conference. Anderson and Tavolier are partners in Triad Event Management, and were elected to the Cleveland Pride board last year. Anderson is also President and League Commissioner for the North Coast Athletics Volleyball, which runs the gay volleyball program in Cleveland, and Tavolier is the Executive Secretary and league Secretary and Treasurer for NCAV.

Cleveland is expected to compete with bids from Boston and Miami for the 2014 event. For the first time in the bidding process, bidding organizations are able to propose new sports.

The Federation of Gay Games, which meets this weekend in South Africa, is expected to select a host city in 2009 during their annual meeting in Cologne, Germany. The German city hosts the Gay Games in 2010.

"We are very excited to start this round of the bidding cycle," Darl Schaaff, Site Selection Officer, says in a prepared statement. “Several organisations have contacted us and we are looking forward to working with them and with any other interested groups during the next two years. The additional flexibility introduced into the sports program will encourage even more exciting proposals from cities throughout the world."