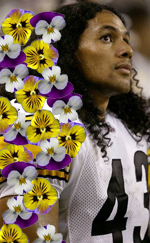 Hard-hitting, long-haired Pittsburgh Steelers safety Troy Polamalu had some choice adjectives to describe the NFL of late after one of his teammates, possible Hall of Fame wide receiver Hines Ward, was slapped with some fines for hits.

It loses so much of its essence, and it really becomes like a pansy game," the Steelers' Pro Bowl strong safety said. "I think regarding the evolution of football, it's becoming more and more flag football, two-hand touch. We've really lost the essence of what real American football is about. I think it's probably all about money. They're not really concerned about safety."

Of course, it's the 'pansy' comment that sticks out to me. Is this the case of a "homophobic" remark or not? How gay-centric is the term 'pansy'? Mirriam-Webster certainly thinks it targets gay men, calling it disparaging and offering this definition: A weak or effeminate man or boy; a male homosexual. Pansy is certainly a term used over and over to demean gay men as weak. I have to wonder how often the word "faggot" flies out of Polamalu's mouth.

League commish Roger Goodell has responded to Polamalu's allegation, focusing on his comment about the money and saying nothing (that I could find) about him using the term 'pansy.' Shocker.