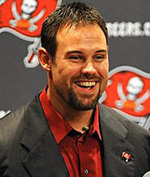 The Tampa Bay Buccaneers on Sunday retired the jersery of fullback Mike Alstott, one of the franchise's most popular players and a longtime fave of Outsports fans. Over the years, we have gotten numerous requests for shirtless shots of Alstott, though, alas, none have ever surfaced.

Though Alstott's name was spelled correctly on the red Pewter Era jersey, the creamsicle version bears the name "Alsott."

But the Sarasota Herald-Tribune shed more light on the misspelling:

Bryan Glazer, the Buccaneers executive vice president, presented Alstott with his first Tampa Bay orange game jersey, on which his name was misspelled, Alsott. He wore it at least twice in NFL games in his rookie season in 1996.

Alstott wasn't the one hot thing about Week 7. Check out our game notes from the action.

Photo from the Alstott ceremony from TV, courtesy of PFT: 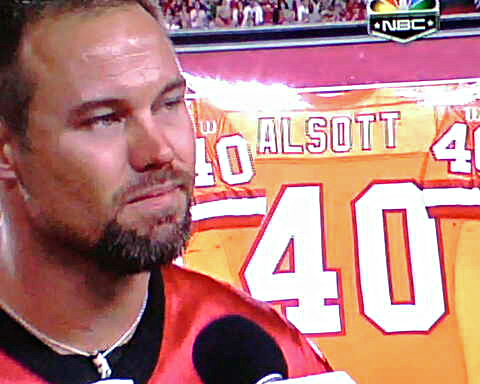