Share All sharing options for: Six-step recipe for Dallas Cowboys 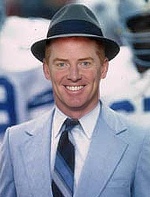 Cowboys fans are, rightfully, panicking. And they should: Their team, that some were proclaiming could go 16-0, is now 4-3 and could easily be 2-5. They have all the talent they need, but like so many Daniel Snyder-meddling Washington Redskins teams, the leadership of the team, from player to owner, has undermined them. If they want to get back to playoff form, here is my six-step plan to resurrect them.

1) Fire Wade Philips and promote Jason Garrett to head coach.
Why are they waiting until January to do this? Wade Philips isn’t the kind of head coach who can manage the egos on this team. They can either give him his “fair shot,” or they can axe him now and salvage this season.
2) Jerry Jones needs to leave the team for three weeks.
Jones thinks that, because guys like Emmitt Smith and Michael Irvin and Jimmy Johnson came there and brought him three Super Bowls that he knows how to win Lombardi Trophies. He doesn’t. As I said, he’s just as bad as Daniel Snyder and even Al Davis. Jones needs to either go on vacation for three weeks or go manage the construction of his new stadium; Anything to get out of his coaches’ hair and off the TV where he’s nothing but a distraction.

3) Get clear about Romo’s situation.
Thank heavens Romo himself got clarity on this and removed his injury as a distraction. No more taking reps with the first team in practice days after breaking his finger. No more “will he or won’t he play.” This is Brad Johnson’s team from here on in, so this is one thing that someone on the Cowboys has done to actually help the team.

4) Throw the ball to T.O. 20 times this week
Owens is the one player on the team who is simply uncontrollable. Completely uncontrollable. You have no idea what he’s going to do or say, and you couldn’t convince him to do something different even if you did. The only way to keep him quiet is to throw him the ball 20 times per game, because as he demonstrated a few weeks ago, targeting him 19 times isn’t enough.

5) Cut Adam Jones.
Face it: The Pacman experiment is over. He’s off getting treatment at some alcohol rehabilitation facility, but he is done. Jerry Jones getting on his knees and begging NFL commish Roger Goodell to go light on Pacman’s sentencing shows how desperate the team is, and it shows what a poor judge of character Jones is.

6) Sign Ty Law.
With Jones on vacation and Phillips gone, the locker room is now ready for a real leader to take the reigns. Enter veteran DB Ty Law. Law’s been to the Super Bowl, and he’s led locker rooms. He knows how to get business done and how to get guys in line. And given Jones’ departure and Terrance Newman’s lingering injury, the team could use a DB who knows the game, even if he is a little slower. Sign Law and give him the keys to the locker room, because someone’s gotta step up into the leadership role in that locker room.