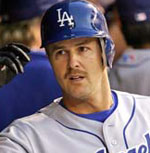 Jeff Kent of the Los Angeles Dodgers has given $15,000 to help pass Proposition 8 in California, which would amend the state constitution to ban gay marriage. I had always heard that Kent was a major league jackass and this just confirms it.

In a disclosure filed with the California secretary of state, Kent listed his occupation as professional baseball player for the Dodgers and his address as Austin, Texas. He gave the $15,000 in a transaction dated Monday but which only now is public.

Wrote a gay Dodgers fan on the Los Angeles Times blog that broke the story:

Your donation is a direct slap in the face to the thousands of LGBT Dodgers fans who support you each season. I am deeply saddened that you have chosen to spend so much money to make sure that my family will never enjoy equality.

Recent polls show the proposition is too close to call, with each side's internal polls showing a dead heat. A new Field Poll (considered the most reliable pollster in the state) has it at 44% Yes and 49% No, but notes that the Yes side is winning among those who have already voted.

One interesting tidbit from the Field Poll: "All age subgroups under age 65 are opposing Prop. 8 by double-digit margins. However, voters 65 and over are strongly in favor of the initiative, backing Prop. 8 by a nearly two to one margin (62% Yes vs. 32% No)."

Related: Type "Jeff Kent" and "asshole" and get Google results.