Share All sharing options for: Young and Magic oppose Prop. 8 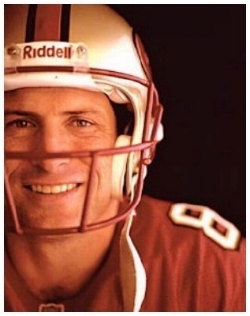 Opposition to Proposition 8 in California, which strips away marriage rights from same-sex couples, is getting a big boost from the support of two Hall of Fame athletes: Steve Young and Magic Johnson. Former NFL quarterback Steve Young has posted several signs at his house urging people to oppose Prop. 8. The proposition's biggest supporters have been members of the Mormon Church, so Young's opposition to the proposal brings a very prominent Mormon voice to the other side. In addition, CBS is reporting that Young's wife has given $50k to oppose Prop. 8. And last night, the Young family released a statement that read:

We believe ALL families matter and we do not believe in discrimination, therefore, our family will vote against Prop 8.

NBA great Magic Johnson has also joined the fight against the proposition. He is now appearing in telephone calls to Californians, urging them to oppose the proposition:

Prop 8 singles out one group of Californians to be treated differently - including members of our family, our friends, and our coworkers. That is not what California is about. So this Tuesday, vote no on Proposition 8. It is unfair and wrong. Thanks.

Given the general opposition to gay rights that the black community often demonstrates, and the support the Mormon Church has given to passing Prop. 8, these are two huge coups and give a real boost to those opposing the proposition.

With just a couple days left until the most important election for gay-rights in our lifetimes, you can still help defeat the proposition with donating money, donating time, and getting out the vote. Visit the No On Prop 8 Web site.