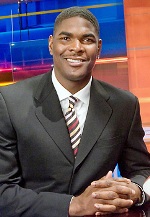 Earlier this summer, a producer friend of mine was pitching a gay-football TV show to, among other networks, A&E. He was told that they didn't want to do football shows. Apparently, they're OK with a loud-mouthed football player doing an interior-design show:

Most of me is rolling my eyes. But part of me thinks that maybe, just maybe, there will finally be a show designed for both my partner and me.