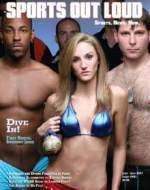 Sports Out Loud has been the only printed gay-sports magazine (as far as I know) for a couple years. We got wind that they would be changing their name a couple weeks ago. I had lunch with a friend last week and we talked about whether the mag's new name had to somehow say "gay." He said yes, I said no. I won. I don't know who was right, but the magazine editors agreed with me.

The mag's new name is Compete. They derived it from comments by Billie Jean King about how her biggest competition was herself. The first issue of Compete is set for release on Jan. 15.