Share All sharing options for: Nude butts to sweep soccer? 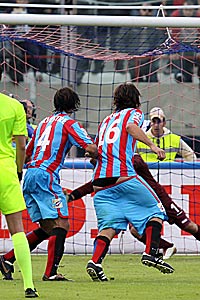 Hopefully it is a maneuvre that will catch on around the world of soccer. Italian pro soccer team Calcio Catania lined up for a penalty kick against Torino when three Catania players lined up in front of the goalie and pulled down their shorts so the goalkeeper couldn't see the kick.

Serie A side Catania has come up with a creative way to score from a free kick: block the goalkeeper's vision by having players drop their shorts down in a wall. The Sicilian team carried out the maneuver to perfection when Giuseppe Mascara scored in Sunday's 3-2 win over Torino.

There is some debate as to whether the move was sportsmanlike or not. At least one official has said the move shouldn't be tolerated. Of course, Catania's chief executive Pietro Lo Monaco thinks otherwise:

A trick? I wouldn't say so. It's up to the referee to decide if it should be penalized, otherwise I don't see where the problem is....Good taste is relative.