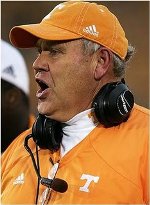 The firing of Phil Fulmer as the University of Tennessee head football coach reflects the ugly underbelly of sports. Fulmer has the third highest win percentage (.746) of active coaches in Div. 1 college football. He just signed a seven-year contract extension. But the university is letting him go. The university will point to his team's 3-6 record this year (his second losing season in 17 years) and a recent mixed record against other top SEC teams. But the real reason for his firing: The fans. Far too many of them, after a couple years of sub-par results from their teams, start demanding the heads of their team's head coach.

Then you have fans and athletic directors like those of Penn State. Their football team had four losing seasons from 2000-2004. Some called for coach Joe Paterno to be fired, but the school didn't act. Enough alums wanted to keep Paterno. Since then, they went 11-1 in 2005 and won the Big Ten, their worst record is 9-4 (twice), and they're now undefeated and poised for a berth in the BCS Championship game.

It's sad to me to see guys like Fulmer, who've done so much for a team and a school, get ousted because "what have you done for me lately" fans want him gone, despite the success he's brought to the school. It's the mark of spoiled fans, to me. You never hear fans of teams that are up-and-down calling for the heads of coaches.

This isn't an across-the-board criticism of those who question their team's head coaches. Clemson fans have been critical of head football coach Tommy Bowden for the last few years and have wanted him fired. But Bowden had no great success at Clemson to mark his time there. The best he mustered was a 9-2 record and a second-place finish in the ACC; this was after an 11-0 season at Tulane before taking the Clemson job.

But seriously, Volunteers fans. Couldn't you have laid off Fulmer a bit? Did you really need to cost him his job? For your sake, I hope you get the coach you want, but beware the devil you don't know . . . .