Share All sharing options for: Leaf falling again in Texas 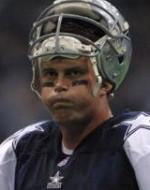 Apparently, Ryan Leaf has been a quarterbacks coach at West Texas A&M. And apparently, he has left sooner than anticipated. He was reportedly suspended from his duties for asking a player for painkillers, and today he resigned as coach. As Yahoo! Sports wrote, he had allegedly been asking players for "something a little stronger than Tylenol or Advil."

Well, since he's already in Texas and now unemployed, there's another football team down there, whom he used to play for, who might be able to use his services.