Share All sharing options for: NFL player: 'Maybe he likes other men' 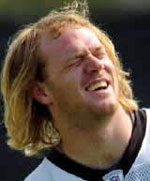 Jacksonville Jaguars wide receiver Matt Jones (photo right) took a shot at Joey Porter of the Miami Dolphins, after Porter criticized Jones' felony cocaine charge. This is the same Porter who was fined two years ago for calling another player a "fag."

"I don't even know why he's even thinking about me," Jones said. "I mean, maybe he likes other men and sits up and thinks about stuff, so I don't know. ... Is Joey Porter the commissioner? Then why would I even worry about it?"
Background: Jones was charged with cocaine possession in July in Arkansas. He agreed to enter a drug rehab program that could wipe out the felony charge. He was also suspended three games by the NFL. Porter called out Jones for what he said was a double standard.

On a conference call with reporters Wednesday, Porter responded to a question about the NFL's crackdown on hits deemed illegal and dangerous by saying he was "still trying to figure out how a guy gets caught with cocaine in his car and still plays the game and nothing happens."

"How does he get away with that?" added Porter, fined $20,000 last month for criticizing referee Ed Hochuli after a loss to Houston. "And then you fine people $20,000 for making comments to the media about the refs. The guy got caught with cocaine."

Jones ripping Porter by saying he "likes other men" is supposed to put Porter in his place by implying he's gay, which to a lot of pro jocks is the worst thing to call another player. Porter played the same card using more direct language when he called Cleveland Browns tight end Kellen Winslow a "fag" in a 2006 game. Porter was fined $10,000 by the NFL and said the word fag was a common word in his upbringing and he didn't mean to offend anyone.

Of course, Porter had no problem kissing his coach on national TV in 2006. Porter is a loudmouth loon who doesn't have a clue, while with Jones it seems you can take the boy out of Arkansas, but you can't take Arkansas out of the boy. The two of them should get a room.

Update: I like how Deadspin put it: "The war of words between Joey Porter and, oh, everybody went from moderately amusing barbs to junior high homosexual jokes, which is typical in the hypersensitive, homophobic world of professional football players."

Hat tip to reader J.P. for the item.