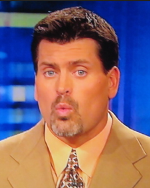 Over the last two years, I have been drifting more and more away from ESPN. I find the conversations terribly insipid and usually focused more on style than substance. Plus, I just think many of their NFL analysts suck. Take Mark Schlereth for example. This was his analysis of the NFL's fine on Justin Tuck for hitting Brooks Bollinger last Sunday:

The NFL looks completely and totally foolish. Look at Justin Tuck. Here's the thing. When you heard the ref, the ref came on, ‘cause I watched this game, and I broke this game down, the ref said, "Justin Tuck, personal foul, using all your body weight to tackle the quarterback." Boy, you're that smart? How much body weight can you use? 22%, is that OK? Maybe 37%? Can you assess that as you're watching the game? ‘Cause if you can, you should be working on your Nobel Prize, not officiating games.

That's four foolishes, three ridiculouses and one buffoon. No comments on the rule the NFL cited in fining Tuck. No even explaining the rule. No explaining what Tuck did or what happened after the play. Just lots of mindless ranting. And Schlereth isn't nearly the worst of the bunch (see Merrill Hoge for that honor). I get that the college kids want someone screaming about something, but gimme SI's Peter King or even Dr. Z any day.