Goin' Back to Cali: Gay in Virginia

Share All sharing options for: Goin' Back to Cali: Gay in Virginia 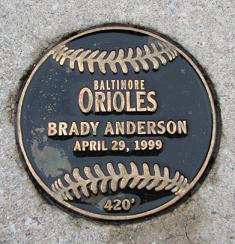 As you may or may not know, my partner and I started a 14-day trip from New York back to Los Angeles today. I’ll be posting here about the trip every few days. And tonight, in Charlottesville, Va., was a classic. We spent most of the day in Baltimore, where I got a peek at Camden Yards. What a gorgeous stadium. Surrounded by a brick façade, it’s the most classic-looking stadium I’ve ever seen (blows Fenway away; never been to Wrigley). I loved the little landmarks just outside the stands that showed where home runs had been hit over the years. A name familiar to many of our readers was among them. We also visited the aquarium in Baltimore. As avid SCUBA divers, we love watching the sharks, anemones, fish, turtles and so many other breathtaking animals move through the water; The aquarium there was the best I’ve seen.

But it was in the hot tub at the hotel that the action happened. We decided to spend the night in Charlottesville to see one of our founding Outsports members, Chip, who works at the University of Virginia (he’s doing great with women’s lacrosse and field hockey). Talking to him about the two sports really is an eye-opener; Even in sports where women are assumed to be lesbian, he says it’s still so rare for female coaches to be out. Still, many of them are working quietly at their colleges, breaking down barriers slowly.

After a wonderful dinner with Chip we headed back to the hotel and to the hot tub. Joining us in the hot tub were two women from Annapolis. They asked us what we were doing in Charlottesville, and we told them we were moving to Los Angeles. Then the younger woman (who divulged her age as "higher than 35") asked us if we were married, to which I replied that yes, we were. For some reason she seemed to doubt me, so we showed her our matching rings. It was at that point that I realized she hadn’t been asking if we were married to each other; she was just asking if we were married to a woman. It was also in that moment that she realized what my answer meant.

"Stop pulling my leg," she said in her Southern accent, while her friend seemed lost for words.

I assured her that we were married to each other, but she didn’t believe it. I asked her if she wanted us to kiss to prove it.

"Yeah, let’s see you kiss," she said, certain she had gotten us.

"You’re sure you want to see this?" I asked.

So I leaned over to Dan, grabbed his shoulder, and I planted a deep, wet kiss on him. The woman, who had been standing for most of this exchange, fell back into her seat in the tub.

"I’m okay with that," she assured us. We thanked her and assured her that we were fine with it, too. She laughed.

"You know, I know lots of people like that. I wait tables, and there’s lots of ‘em. And I think it’s fine."

She went on and on questioning us, not believing that we were gay. I didn’t know how else to convince her; We weren’t about to go any further than a kiss to prove it to her. I think she was just completely taken aback that a gay couple would be in Southern Virginia and so very 100% okay with telling her that we were, in fact, gay and happily married. I'm sure we seemed so comfortable with being gay and telling her, and so completely unapologetic about it, that it somehow seemed normal to her, and in that she was surprised.

Leaving the pool, I felt like our good deed had been done for the day. Funny thing is, I think she felt the same way.