Mitcham puzzled by lack of endorsements

Share All sharing options for: Mitcham puzzled by lack of endorsements 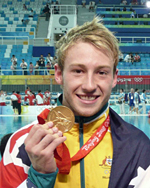 Four months after winning a gold medal in platform diving, Australian Matthew Mitcham still has not secured any sponsorships, a development that perplexes him. In an interview with the Sydney Morning Herald, Mitcham says he does not regret coming out before the Games, but does wonder if that has made any companies cautious.

Mitcham needs sponsorships if he hopes to be able and train for international competitions leading up to the 2012 Games in London. He said that the money he earns from diving is "less than minimum wage."

As I said, nothing negative has come of the coming-out experience, which is a really good thing - it's what I would have hoped for, but one can't help but think I might not have sponsorship yet because I came out before the Olympics. ... It might not be true. I'd like to hope that's not the case, and I put it to the businesses and companies of Australia to prove that thinking and mindset wrong and challenge that, because it's just too, too easy to think that's the way it is.

Mitcham, 20, certainly has benefited from winning the gold medal and said he has received "tremendous support from the gay community." He also received a total of $35,000 for appearing on an Olympic stamp and from an Adidas bonus. He was named Australian athlete of the year and has helped raise money for AIDS awareness. But ultimately he will need money to train and compete or he said he is prepared to walk away from the sport.

I have so many interests in my life that my life could go in about 1,000 different directions, but diving is one of my main passions, and I do think that I can achieve what I achieved, again.

Not knowing the Australian sports marketing scene, it's hard to know if Mitcham is not getting sponsors because he is gay or for other reasons. The economy in Australia, like the rest of the world, is struggling and companies are thinking twice about every endorsement deal (GM recently dropped Tiger Woods).

In addition, diving is not a major sport in Australia, as opposed to swimming, so perhaps Mitcham's reach is limited. Also, Mitcham and his partner, Lachlan Fletcher, went to France for a long vacation right after the Games and he did not arrive back in Australia like the other Olympians when media attention was highest. His decision to take himself from the limelight when his profile was at its peak may have made him less of a "get" for sponsors; in our sports-saturated world, nothing fades faster than a gold medal (unless you are Michael Phelps).

Or maybe it's still not good from a marketing standpoint for a male athlete to come out. As the Morning News said:

An Olympic gold medalist, young, athletic, vibrant and good looking. Surely, he could be a fit for numerous products or companies? Perhaps, some still see the 20-year-old as nothing more than "the gay diver."

Let's hope not. It's also important to note that Mitcham seems to have no regrets about coming out.

I'm really glad that I actually did win the gold medal because had I not, then I would have forever only been known as the gay athlete or the gay diver who maybe didn't even dive very well but was famous because he was gay.

It [coming out] has brought so much attention because it's put me out there, and people know who I am, but I'd like to think that it's not the most interesting thing about me.

Like everything, there are pros and cons about it, but nothing bad has come out of coming out yet, and that's one of the best things of the whole experience.