Share All sharing options for: Professional soccer's got a new rent boy 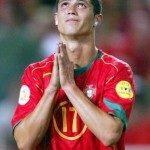 There are professional soccer players across Italy praying that Victory doesn't name names. You see, he's the the latest rent boy to come forward and claim that he beds down pro soccer players in Italy for cash. A lot of cash, actually. About $2,000 a pop, so to speak.

"A lot of them are bisexual, they are married or have girlfriends. They have a respectable image but none of them will ever admit to being gay, not for the time being anyway. Most of the time we meet in hotels after matches, that's when they get their only free time," he said.

The man, who says he's also a pro player in the minor leagues, dished during a recent TV interview. There are group sessions, mouth-to-mouth kissing and above all else, discretion, he says. While he proudly spills some details, he won't name any names, including his. The journalist in me thinks this is suspect. But that's just me.

"A lot of these players have girlfriends or wives - it's all a facade," he said. "They are really scared of coming out because they are terrified what the supporters would say."

Oh, the travails of pro jocks.