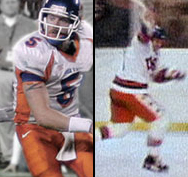 ESPN has gotten hit-or-miss with their fan-voting contests that seem to creep up every few months. Their "Who's now" contest was completely absurd and got no one talking. At least a few people are watching their "Greatest Sports Highlight of All Time" competition. It's (yet another) NCAA-tournament-style contest pitting their top sports highlights against one another. The final has the 1980 Miracle On Ice against the 2007 Fiesta Bowl that saw Boise State build a lead, then blow the lead, then come back in the final seconds to win with a series of wacky plays. For my money, the two beaten in the semifinals (The 1972 "Immaculate Reception" and Boston College's hail mary against Miami in 1984) are both better than the '07 Fiesta Bowl. But, 2007 is more recent than 1984 and 1972, so it's in (the more recent highlight has won nine of the last 14 matchups). -Cyd Zeigler jr.