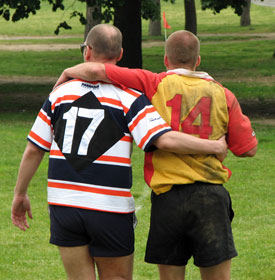 Northern Ireland Sports Minister Edwin Poots wins the award for clueless official of the year after he compared gay sports team to apartheid.

One of the team’s founders, Declan Lavery, told the BBC that anyone was welcome to play. "When the club was set up it welcomed members regardless of their age, creed, religion, sexual orientation or whatever, and that's how it continues," Lavery said.

Poots is simply a misinformed boob who has no concept of how gay sports associations came about. Apartheid is an odious social concept, practiced in South Africa, which systematically made one group of people second-class citizens on the basis of their race. It is offensive to use this same term to apply to gay organizations. Gay sports groups do not exclude others from participating, so the analogy is flawed on its face.

“Gay-oriented” is a better description of groups like the Titans and every other (Outsports has a comprehensive list). None I know of prohibit non-gay players and none impose a “litmus test.” Instead, by identifying as gay, these groups become a welcoming place for those athletes who feel they have to hide or censor themselves if their play on a mainstream team or simply want the camaraderie; there’s simply less BS to deal with. It’s similar to social groups formed by any minority.

“As a club, we feel it is important that the focus remains on the sport,” said Titans player Trevor McMahon. We are simply a bunch of like-minded guys who get together to play rugby. We are here for the sport, not the politics that may surround it. We see the sport as our first priority; our sexuality or perceived sexuality has no influence over our sporting ability. We hope that the line can now be drawn under Mr. Poots' comments and that we can be left to enjoy playing rugby."

The Bingham Cup, the international gay rugby tournament, will be in Dublin, Ireland, in June. Poots should attend and perhaps he’ll learn something about how sports transcends labels. –Jim Buzinski