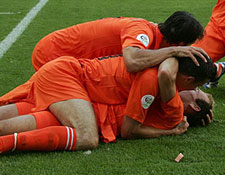 In a wide-ranging interview with the Times of London, Sepp Blatter, the head of FIFA, soccer’s worldwide governing body, addressed why gay soccer (or football) players don’t come out.

“There are gay footballers, but they don’t declare it because they think it will not be accepted in these macho organizations. But football is open for everybody, which is why they made a gay competition in South America. And look at women’s football: homosexuality is more popular there.”

With the South America comment, Blatter is referring to the gay soccer championships held in Buenos Aires last year; they are in London this August. As for women, I am not aware of publicly out female players. It might be like the WNBA, where there are a lot of lesbian players known within a small circle of like-minded fans, but almost none that are publicly out.

Efforts have started to address homophobia within the English Premier League, but like U.S. professional sports there are no openly gay players.

Even in Britian, a country that legalized gay marriage in 2005, attitudes among athletes toward homosexuality remain stuck in the past, the Culture of Soccer blog notes. Homophobic chants remain common in stadiums there. When the BBC’s radio program Five Live attempted to poll Premier League managers on homophobia, none returned the survey. The Independent had more luck in getting responses to its survey of professional players in England. The results were not promising, however: 57 percent of all players and an astonishing 77 percent of League One players said that football is homophobic.

Blatter is stating the obvious in acknowledging gay players in the sport, but attitudes on both sides of the Atlantic remain depressing the same. Little will change until an athlete can feel comfortable coming out and continuing his career. –Jim Buzinski