Will Eli strip to his briefs?

Share All sharing options for: Will Eli strip to his briefs? 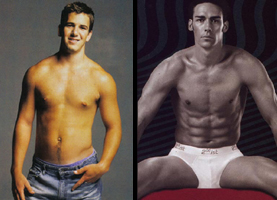 I guess the rumors of Tom Brady in his favorite pair of Calvins hasn't sat well in the Manning clan. It's now being rumored that Giants quarterback Eli Manning will model 2xist underwear in an upcoming campaign. It would make Manning the second Giant to model the gay-targeted (even if they say it's not) underwear brand; Uberhunk Jason Sehorn donned them in a campaign about seven years ago.

I'm certainly left with one big question: Why? There are some guys with great bodies in the NFL, but Eli Manning ain't one of them. And there are plenty of NFL players who are oh-so sexy, but Eli Manning ain't one of them. I won't pretend to know how Manning's package will fill out the briefs, but it certainly seems like an odd choice given the 27-year-old's baby fat. I think even Jim would agree that, at least they picked the right Manning brother; I don't want to imagine Peyton in anything less than a complete Colts uniform. -Cyd Zeigler jr.