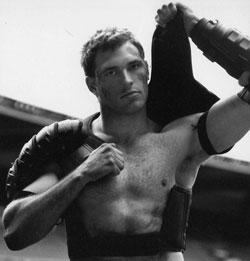 After seven rounds of voting, the field of 64 has been announced in the King of the Hardwood contest, in which you pick the hottest jocks in the world.

It’s an eclectic field, but I have one small quibble – kickboxer Brandon Templeton by far had the most votes in the qualifying rounds (four times as many as Lamont), yet got a third seed.

A large quibble is that this is not a racially diverse field. Not a single black athlete (and only a smattering of Latinos) made the field despite being well-represented in the qualifying rounds. If you were a young, white athlete who posed shirtless you were golden. Obviously, the voting reflects the tastes of those who voted, and it does mirror the images that most dominate popular culture. One can’t legislate taste, but how a Reggie Bush loses out to a Jake Delhomme is beyond me.

To vote, go here starting Monday. Each region has a photo slideshow so you can see the contestants.

To check out the complete bracket, go here.

Big tip of the hat to Layne, aka Mariner Duck Guy, who did all the work in putting this contest together. –Jim Buzinski