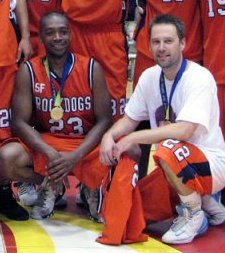 Logo's show about gay basketball team the "Rock Dogs" has a new title: "Shirts and skins." I'm still holding out hope that producer Bill Kendall (right, in white t-shirt) will be able to steer the show in the right direction and not let people who are sports-senseless drive its direction. But the cliche, homoerotic title Logo has decided to go with certainly makes me say, 'gulp.' I've just been very afraid that people who have no clue about sports other than "jocks are hot" will have way too much say in the show's development. Hopefully, Logo will listen to him. -Cyd Zeigler jr.