Weir gets the gay question

Share All sharing options for: Weir gets the gay question 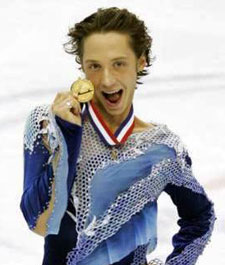 U.S. figure skater Johnny Weir was asked by the New York Times about his sexual orientation and he came off with a classic response.

“There are some things I keep sacred,” Weir said. “My middle name. Who I sleep with. And what kind of hand moisturizer I use.”

The Colorado Springs remark was in reference to the headquarters of the United States Figure Skating Assn. and Weir’s contention that his more sexually ambiguous style is frowned upon in favor of the more outwardly masculine style by his rival Evan Lysacek.

“If he doesn’t want to skate to music that’s pretty and wear a pretty costume, then go rollerblade or skateboard or do one of those extreme sports,” Weir said of Lysacek.

For his part, Lysacek plays the role of the physical jock skater to the hilt (the Times said he is dating ESPN’s Hottest Female Athlete, Tanith Belbin, that he drives a truck and wants skating to add “extreme” events ala the X Games).

At the nationals, the two finished tied in points and Lysacek won on a controversial tiebreaker. Weir is off to compete in the worlds this weekend in Sweden, while Lysacek has pulled out due to an injury.

I have long admired Weir for not backing down about who he is and for doing everything to acknowledge he is gay without saying the words.

It is annoying, though, to see this contrast made between him and Lysacek, as if being creative and flamboyant means Weir not a “real” athlete. Lysacek is clear what side he is on when he says he thinks “the definition of being dressy or dressing up is like having glitter all over you; to me that’s just such a joke.”

Skaters are tremendous athletes who put a lot of physical strain on their bodies and suffer for their sport. This includes Weir, even if he “owns at least 10 fur coats, did a magazine fashion shoot wearing six-inch heels, and calls Russia ‘my motherland’ despite being from Pennsylvania Amish country.” –Jim Buzinski