Share All sharing options for: Nuisances from the NCAA tournament first weekend 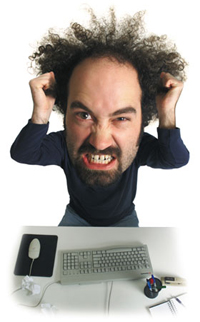 So the first weekend wasn't too bad: Took Thursday and Friday off, watched dozens of hours of hoops on my brother's snazzy HD wide screen TV, saw my Xavier Musketeers roll through two games, enjoyed Western Kentucky and Davidson rolling to the Sweet 16, and yelled at Billy Packer more than any man should be allowed.

Great times, eh? Of course, I'm a 30-year-old that acts like a senior citizen, so here's what bugged me:

IT'S PRONOUNCED "ZAVIER", NOT "EGGS-AVIER": The Musketeers have been winning big games for over two decades. Is it too much for people like CBS play-by-play man Craig Bollerjack to get the name right? Granted, he corrected himself a few times, but come on: Its not that tough. We realize Xavier McDaniel said his name different, but he's been retired for years.

MAKE SURE BILLY PACKER IS MUZZLED SELECTION SUNDAY: For the second time in three years Billy Packer looked like an ass during the selection show, and looks worse as the games were played. Two years ago he whined, kicked, screamed, and bitched about all the mid majors getting at large berths ... and then watched two MVC teams make the sweet 16 and George Mason the Final Four.

This year? He badgered committee chair Tom O'Connor on why the ACC didn't get more than four teams in despite having the number one RPI (Of course this ignored the fact Virginia Tech did little save make a good run in the ACC tournament and sweep a bad Maryland team).

And what happened after? Only one league team made the sweet 16, with Miami (Fl.), Duke and Clemson all going home early.

More Packer bitching, mid-major terminology annoyance and others after the jump.

WESTERN KENTUCKY BEATING DRAKE IS AN UPSET: I heard three different people on CBS say the 12th-seeded 'toppers 1st-round win wasn't an upset because "they're both mid-majors". Who made this freaking rule?!?!

First off, Drake is a five seed. If this were Notre Dame or Michigan State, it'd be the greatest finish to an upset this year. The Bulldogs? Eh, it's no big deal.

Drake comfortably won the Missouri Valley Conference. For those CBS'ers who forgot, in 2006 and 07 the MVC put a combined three teams into the sweet 16. That's as many teams as the ACC and the Big 12, and more than the following leagues: Conference USA, the Mountain West Conference, and the big, bad, ugly Big Ten.

WILL SOMEONE SHRINK THE NCAA LOGO AT MID COURT?: Did you see the one in Raleigh? The logo as big as North Carolina? Monstrosity doesn't begin to describe it. Even UNC coach Roy Williams agreed, saying players were slipping on the logo.

"Somebody's going to get hurt," Williams said. "I've said that for years and years. Every coach here at this site said it is a mistake to have that".

IS IT TOO MUCH TO ASK ANNOUNCERS TO KNOW GEOGRAPHY?: CBS analyst Bob Wenzel as Belmont took a late lead on Duke:

"The Bruins from the EAST coast!"

Actually Bob, Belmont is in Nashville. Last time we checked, Tennessee isn't close to the ocean.

IT'S STEPH-EN, NOT STEPH-ON: Billy Packer incorrectly said this early in Davidson's 1st-round win over Gonzaga. A little research, William. And how can you get "on" from the spelling "e-n"?