Better to kiss than fight

Share All sharing options for: Better to kiss than fight 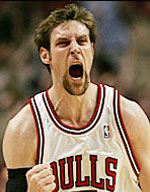 Andres Nocioni was standing in front of a media throng after practice Monday, apologizing again for his outburst Saturday toward interim coach Jim Boylan, when Boylan snuck up from behind and planted a wet one on Nocioni's cheek.

Boylan is 18-25 as the Bulls' interim coach and he wants "interim" taken off. Two days earlier, Nocioni was kicked out of the locker room after shouting at Boylan. He seemed contrite after Monday's practice. "What I did was absolutely wrong,'' Nocioni said. Nothing was said about the kiss. --Jim Buzinski