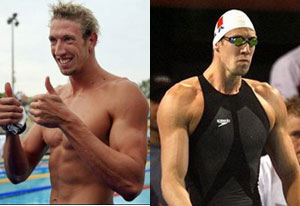 The new high-tech swimsuit is making waves after a slew of world records have been set by swimmers wearing them.

It’s the $800 swimming costume that has rocked the sport from its foundations.

Australian coach of the year Stephan Widmer warned swimming's governing body, FINA, to police any further development of Speedo's controversial LZR Racer. … A consultant in the design of the LZR, Widmer said the suit shouldn't be considered a form of cheating, despite the availability to every remaining suit restricted as Speedo struggles to cope with the demand.

There have been 13 world record broken this year by a swimmer wearing the suit, and it’s only been in use a month. The latest record-setter was French swimming stud Alain Bernard. On consecutive days he set world records in the 100-meter freestyle at the European championships. The old mark had stood for eight years and Bernard beat it by .24 of a second (a pretty good margin). He also set a record in winning the 50-meter freestyle. Bernard (shown with and without his suit) is 6-6 and does have an amazing body (his arms are huge), but many are crediting the suit with his performance.

With the Beijing Olympics looming in August, coaches and officials are worried the swimming world could be split into those who have access to the $550 suit and those who do not. The latter could miss out because the suit may not be immediately available to all or because their national federations are contracted to other manufacturers.

The LZR has an edge because it is “seamless, contains a water-repellent fabric and is said to have 5% less passive drag in the pool than an earlier version.”

I have long decried the move from Speedos to full-body suit on aesthetic grounds, but the technological edge the LZR suit gives is worrisome. Unless all swimmers have access to the suit (and not only to those who can afford it), any records or medals set by swimmers wearing a LZR will be suspect. We want athletes to win because they train harder and have a greater drive, not because they are wearing a special material that gives them an edge.

Other manufacturers are unveiling competitors to the LZR, which means this will be a race decided by technology. Just make all swimmers go back to traditional Speedos and everyone will be happy. –Jim Buzinski