He's an MMA fighter and gay

Share All sharing options for: He's an MMA fighter and gay 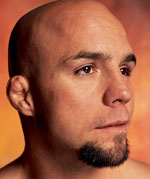 A 5,000-word profile in the New York Times Magazine takes a hard look at the underground fight club Felony Fights and the mixed martial arts world through the eyes of Shad Smith, a professional fighter with a long criminal resume. He’s also gay, a piece of his personality that writer Paul Wachter explores but does so in a matter-of-fact way that should serve as an example to sports writers who face gay jocks on their beats.

I asked Smith why he spent so much of his youth looking for trouble. I expected some sort of clichéd, though possibly true, explanation — a difficult childhood or a Napoleon complex. What I didn’t expect him to say was, “You know, bro, the sexual-preference thing.”

Smith is gay, and I know of no other professional fighter who is openly so. “I was always scared that my mom and dad would find out and wouldn’t like me, and my brothers wouldn’t like me,” he said. “I was petrified, because I didn’t want anyone to find out. And I would try to be the toughest person around. That way, no one would suspect, no one would ever say it, no one would think it.” ...

Smith’s boyfriend, Jesse Empey, also joined us. Younger than Smith, Empey has an angular face and dark features and looks a little like Keanu Reeves. He’s a makeup artist and used to live in New York, and he met Smith through a mutual friend.

Smith tackles his opponent, and when he establishes a full mount, his opponent’s father quickly intervenes and stops the fight before Smith’s punches can do further damage.

“But keep watching,” Smith told me. The camera is fixed on Smith as he unwinds the wrapping from his right hand. The camera zooms in, and there’s a long patch of white running along one of his fingers. “That’s where my bone came out,” Smith said, smiling. “It hurt like hell, but I kept fighting.”

In some regards, Smith is similar to Rod Llaneza, an Atlanta kickboxer who is also gay, though he came out after leaving the sport. But his experiences in the physically-demanding sport are just as captivating as those told by Smith. --Matt Hennie

Matt Hennie, an Atlanta writer, contributes to Outsports and has a gay-themed sports blog.