Share All sharing options for: It’s not gay, it’s “bromance” 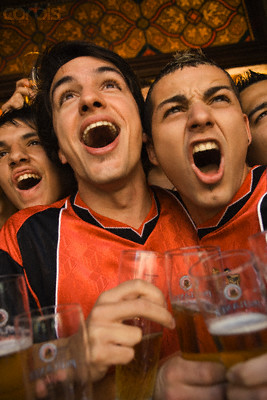 An intrepid reporter at azcentral.com has uncovered the edgy and increasingly acceptable phenomenon known as bromance, defined in this article as "the complicated love and affection shared by two straight males." I read this and thought, why does it have to be between straight males? I'd say I've been wrapped up in a few bromances, with gays and straights alike! In many ways, Outsports is a community built on bromance. Some of the article's highlights:

Joe Tipograph, 27, a graduate student at Emory University... David Abrams and Greg Kopstein have a triangular bromance of sorts that began when they were kids growing up as neighbors in Rockville, Md. They went to separate colleges but reunited one summer to work as camp counselors in New Hampshire... Recently Tipograph wouldn't join in a football gambling pool unless he could do so with Kopstein. Their friends promptly dubbed them "Team Brokeback," referring the 2006 tale of cowboy romance between Heath Ledger and Jake Gyllenhaal.

...There seems to be little worry about perceptions of homosexuality in a bromance filled with macho pursuits like drinking beer, watching sports and playing video games. But rifts can occur when serious girlfriends enter the picture or someone moves to another city. Tipograph and Kopstein both have girlfriends and make it work.

Ah, that's precious. If these guys are so into bromances they should check out their local gay sports leagues, where men who like sports hang out and drink beer together on a regular basis. Do straight men who like sports, beer, and chicks really have a special bond? I think if you drop "chicks" form that sentence the bond doesn't change at all. (Note: I'm not suggesting a desire to drop chicks from anything. I dig chicks, especially chicks who dig Outsports). --Ryan Quinn