Share All sharing options for: Where WNBA players earn 500K 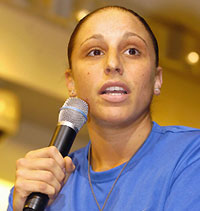 Diana Taurasi makes a reported $49,000 a year as a star for the WNBA’s Phoenix Mercury. That’s walking around money compared to her salary playing in Russia before mostly empty arenas of non-paying customers. Her Russian team pays her 10 times her WNBA salary.

Shabtai von Kalmanovic, who spent time in an Israeli prison on spying charges and whose source of wealth is murky, is a very rich Russian, who the Los Angeles Times says also has a passion for women’s basketball; so much so that he pays WNBA players many times their U.S. salary to play for his Spartak team in the WNBA’s offseason.

He's got a thing for basketball, a sport he played growing up in Lithuania. He has dumped millions of dollars into rebuilding Spartak, the franchise he owns, into what is now one of Europe's best women's basketball teams.

Kalmanovic cherry-picks the brightest stars from the Women's National Basketball Assn., pays them as much as 10 times more than they earn in the United States, and brings them to Moscow in the WNBA off-season, where they live in luxury and play before halfhearted audiences. … The 60-year-old Kalmanovic is part of a growing band of Russian millionaires investing in sports franchises as vanity projects, jostling to outspend and outplay one another with a patriotic, high-rolling fervor.

Kalmanovic has a very expensive hobby, one that will see him spend $7 million a year on; Moscow’s regional government spends another $7 million on the team. The team is a money drain, having to pay for TV coverage and not charging customers. The real winners are the American players, who finally get an idea of how their NBA brothers live. Kalmanovic sounds a lot like a Russian Mark Cuban, but better dressed.

Kalmanovic says his players are on par with George Michael and Madonna, and he spoils them rotten. A staff of 25 assistants, not counting drivers and housekeepers, caters to their whims. They are chauffeured in Mercedes-Benzes, put up at Europe's finest hotels and greeted with bouquets at every airport, whether they've won or lost. They aren't allowed to carry their own luggage -- they're women after all, Kalmanovic says.

"If [the players] will go to the game and think, where's her child or is the TV working at home and where will she eat after and is the flight home booked and will the money arrive on time -- if she has any concern other than basketball, I cannot demand the maximum from her," he says. "I have to take away each and every concern. "They should be treated like people of art, like stars."

Taurasi and fellow WNBA players Sue Bird and Lauren Jackson share a gated house with an indoor pool and sauna. "This is our window of opportunity to make money," says Taurasi. Good for them. If Kalmanovic needs two guys to run his Spartak’s website he can drop a line to mail@outsports.com.