Share All sharing options for: Gandalf inspired Amaechi's coming out 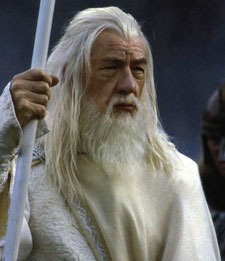 Former NBA basketball player John Amaechi, who came out as gay a year ago, says he was inspired to make his move by Sir Ian McClellan.

"I nearly just decided not to ever go back to America and just stay here and say "let them froth around in their own mess," but I went to Manchester Pride and Sir Ian McKellen was the Marshal … I'm not very fluffy with these things and I'm quite cynical.

"However, the sight of him waving and looking at the reactions of people to him waving, the sight in people's eyes of 'That's Gandalf, international superstar.'

"I thought, obviously I am not anything like that status of superstar or even celebrity, but if on a smaller scale I could have an impact that would be a good thing.

"And the faces of gay are quite homogeneous aren't they?

"If you were relatively stupid, and unfortunately many people are, you would imagine all gay people to be either like Graham Norton or Jack from Will and Grace, so I thought it would be quite interesting to throw something else into the mix, namely me."

In a wide-ranging interview with Britain’s Pink News, the always thoughtful Amaechi touches on being black and English; the difficulties of an active player coming out; U.S. politics and his decision to adopt two teenage brothers in Florida. He is always worth listening to. –Jim Buzinski